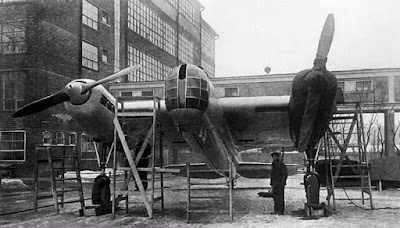 In the 1930s the Soviet Naval Air Arm had an urgent need for a high-speed landplane able to fulfil the roles of torpedo-bomber, bomber and reconnaissance aircraft.
The Tupolev OKB began work on a machine to meet these needs in March 1934, the project work being undertaken by the team led by Vladimir M. Myasishchev with Mosolov as chief engineer. The project was given the OKB designation ANT-41 and the VVS designations T-1 and LK-1. In August 1934 and again in 1935 the UVVS issued its operational requirements for the aircraft. According to these, the ANT-41 was to fulfil the roles of 'cruiser', bomber and torpedo-bomber with a top speed of 300-340 km/h, a service ceiling of 7,000 m and a normal range of 1,300 km (with a maximum of 3,000 km). The requirements were amended again in June 1936. Now the ANT-41 's basic function was a low-level torpedo-bomber with a secondary role as a high-speed bomber and little change in the performance requirement.
The OKB drew up a project to meet these requirements which, as the ANT-41, was an all-metal twin-engined mid-wing monoplane powered by 1,275-hp M-34FRN engines. A particular feature of the project was the large fuselage bay to house two torpedoes or 2,000 kg of bombs.
Work on the prototype began in April 1935 and was finished in January 1936. There were delays caused by the large number of unfinished details and revisions, so that it was not until 28th May that the machine was transported to the airfield. The first flight was made by test pilot A. R Chernavskiy on 2nd June. Manufacturer's tests then got under way, but the first five test flights revealed unsatisfactory stability and were continued using an artificial forward centre of gravity. During a routine test flight on 3rd July the aircraft broke up in the air due to flutter which induced aileron distortion. Further work on the aircraft was halted, and the project modified to incorporate the necessary revisions which were to be incorporated in the second prototype and in production machines. Before the dooblyor could be built, however, the Ilyushin DB-3T was accepted for Naval Air Arm service and no series production of the ANT-41 took place. The aircraft was to have been produced at Moscow Factory No.84. Drawings, production processes and jig design had all been prepared at the OKB and the contracts had been placed for the supply of components.
In parallel with the design of the landplane, the OKB drew up a project for a floatplane version of the ANT-41. The floats were to have been fitted after the completion of state acceptance trials.